ABSTRACT: The privatization of housing (linked to the privatization of means of production), respectively the creation of a new private housing fund, have been crucial for the emergence of capitalist property regime and market economy in Romania. The state withdrew from its position as a developer (of housing stock, but not only), however
it did not remain passive, contrary, it assumed a central role in the creation of the
(housing) market through modifying legislation and creating new institutions that
administered this process. 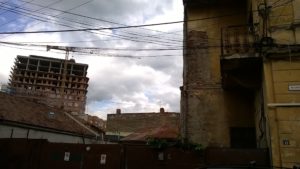 The article is addressing how the ideology of economic liberalism is working through housing politics as a core medium of the transformation of really existing socialism into neoliberal capitalism.

In particular, the article describes how – through privatization – this ideology creates material effects in the housing sector, i.e. accumulation on the one side and dispossession on the other side of the class structure. Moreover, the article insists that the housing stock’s privatization after 1990 happened in relation with the housing politics of state socialism, which allowed the existence of three types of property on housing. The creation of a new private housing fund was tied to post-socialist primitive
accumulation resulted from the privatization of state enterprises and from the
investment of profit obtained in the due process into real estate businesses. After
some introductory ideas about ideologies and housing politics, the article discusses
the privatization of housing and the creation of the private housing stock as central
pillars of capitalist political economy. The description of some features of housing
production and personal ownership of dwellings in state socialism is followed by an
account on the promotion of privatization after 1990 by local-nationaltransnational
actors using the example of the city of Cluj. The last chapter of the article concludes on the process of transformation of state socialism into neoliberal capitalism through the politics of housing sustained by the ideology of economic liberalism.

KEYWORDS: ideology as productive practice, material effects of the ideology
of economic liberalism in the housing sector, housing politics as a core
factor of transforming state socialism into neoliberal capitalism

NOTE: The documentation work that stands behind this article have been realized together with Simona Ciotlăuş and George Zamfir in a recent research under the project Strengthening the Housing Justice Coalition in Romania through reframing the political claims for public housing ran by Foundation Desire from Cluj, Romania in the period February-July 2017 and sustained by Rosa Luxemburg Stiftung. More information about this project and its actions can be found here – https://www.desire-ro.eu/?page_id=3038. The article was translated from Romanian to English by Noémi Magyari.