The Forum Theatre (FT) program was conceived as a peer violence prevention activity. FT is a non-formal education method, a social intervention means through which daily life issues can be discussed. It is a category of the “Theatre of the Oppressed”.

The march called upon the local, county, national and European authorities to remind them that the right to housing is a fundamental human right. In Romania, in the last two decades, it has been restricted by a political economy and a politics of development promoted by the state institutions, which chose to support the real estate investors to the detriment of citizens. Estate business pushed to the margins of society hundreds of thousands of people across the entire country. The tenants evicted from restituted buildings, or from the apartments of older blocks of flats or worker dormitories privatized from one day to another, or from social housing on lands whose estate value increased over night as a result of urban development plans created to favour estate investors, as well as people who do not have the resources to buy or rent housing at market value, have already or could become homeless given that the state ceased to secure their right to housing.

Foundation Desire participated on the The Roma solidarity march „City for the people, not for profit”, and it assumed an important role in elaborating and disseminating the Open letter for the local, county, national and European authorities submitted on the occasion of this March – 17 July 2015. 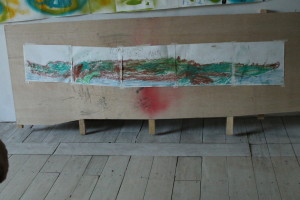