In 2016 Desire Foundation continued its activism against ghettoization of Pata Rât and anti-Roma racism, fighting for housing justice to marginalized persons belonging to the precariatized working class. In this spirit, we conducted two campaigns, which were both supported by the Open Society Foundations.

The campaign “Social housing NOW!” (https://www.desire-ro.eu/?page_id=2219) was run under the project “Justice for Roma through the legal enforcement of housing rights (Cantonului street, Cluj)”,

supported by the program “Engaging Roma in Europe around Justice and Rights” of the Human Rights Initiative/ OSF and lasting between March 2016 and February 2017.

The campaign “Consult us. Roma are not garbage” (https://www.desire-ro.eu/?page_id=2465) enjoyed 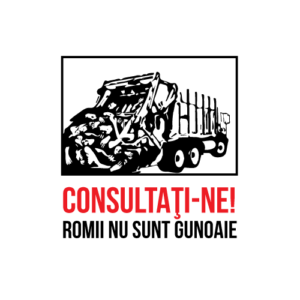 the support of Roma Initiatives Office/ OSF during four months starting with the 20th of August 2016.

On December 17, 2016 – alongside European Roma Rights Centre and Community Association of Roma from Coastei street – Foundation Desire initiated and organized in Cluj the commemorative public event “Pata rămâne a tuturor” (Pata/The stain lingers on). By the means of its two campaigns Desire Foundation provided advocacy materials both for the street march and the multimedia exposition displayed in the courtyard of the Museum of Art, but as well as support for the anti-eviction scene (https://www.desire-ro.eu/?p=2916). Last, but not least, the messages of these campaigns were transposed into the petition “Pata rămâne a tuturor”: Say NO to ghettoization of Pata Rât. Say NO to environmental racism. Say YES to public housing in the city (supporters can sign the petition here – https://campaniamea.de-clic.ro/petitions/pata-ramane-a-tuturor?source=facebook-share-button&time=1481792488).

Finishing our campaigns briefly described above does not mean that we end our civic and political activism for housing as a socio-economic right, against racism and for an infrastructural development that always assures safeguarding measures for the affected persons.

On the one hand, Foundation Desire, and the activist group including people residing in Pata Rât that it nurtured, plans to extend the circle of its collaborators and, by this, its impact. More persons and organizations should be mobilized in order to fight for an anti-racist housing politics that is part of a governance, which takes the responsibility for the socio-economic wellbeing of all the citizens and, therefore, it responds to the societal need for adequate public housing across social classes, but most importantly of the precariatized working class. This means, among others, that we continue to insist on housing as people’s right versus housing as a commodity, namely a source for accumulation of capital. We demand an end to policies which prioritize the market in the domain of housing.

On the other hand, Foundation Desire plans to continue re-enforcing socio-economic rights, including labor and housing rights by strategic litigation. Likewise, it will look having a contribution to re-shaping of national legislation on these matters so that the production of public housing could be part of a redistribution politics based on labor policy favorable to workers and progressive taxation policy.