The second edition of the Forum for Housing Justice, initiated by the Social housing NOW! Campaign and The Common Front for Housing Rights, organized within the program “Strengthening the Housing Justice Coalition in Romania through reframing the political claims for public/social housing” brought together groups and organizations from Romania that advocate for housing and labour rights. 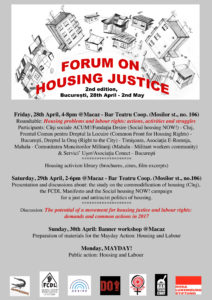 On the occasion of the forum we proposed:

– to discuss some cases / types of housing problems encountered by these groups, analyzed and challenged through collective actions;

– to rethink “housing justice” and “the right to housing”. How do we understand these causes and how do we create consciousness around them?

– to strengthen the cohesion of the connections between the groups; to identify common principles on which we can act effectively at local and national level; to relate to the initiatives through which other different social and political actors respond to the problems in this field;

– and last but not least, to discuss the potential of a critical movement around housing, anti-capitalist, based on radical feminist, anti-racist and horizontal solidarity.